I recently received an e-mail from my worm-loving friend M (for "Mischief") suggesting that I might be the doppelgänger of the Thunderbolt Sow mentioned in this post from The Writer's Almanac (from October 24, 2010): 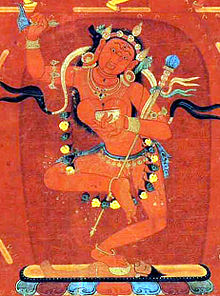 "It's the birthday of writer and explorer Alexandra David-Néel, born in Saint-Mandé, France, in 1868. She had an unhappy childhood, the only child of bitter parents who fought all the time. She tried running away over and over, starting when she was two years old. As a teenager, she traveled by herself through European countries, including a bike trip across Spain. When she was 21, she inherited money from her parents, and she used it all to go to Sri Lanka. She worked as an opera singer for a while to finance her travels. She was especially interested in Buddhism.

"She disguised herself as a Tibetan woman and managed to get into the city of Lhasa, which at that time was off-limits to foreigners. She became fluent in Tibetan, met the Dalai Lama, practiced meditation and yoga, and trekked through the Himalayas, where she survived by eating the leather off her boots and once saved herself in a snowstorm with a meditation that increases body temperature. The locals thought she might be the incarnation of Thunderbolt Sow, a female Buddhist deity. She became a Tantric lama in Tibet when she was 52 years old.

"And she wrote about it all. Her most famous book is Magic and Mystery in Tibet (1929), in which she wrote: 'Then it was springtime in the cloudy Himalayas. Nine hundred feet below my cave rhododendrons blossomed. I climbed barren mountain-tops. Long tramps led me to desolate valleys studded with translucent lake.... Solitude, solitude!... Mind and senses develop their sensibility in this contemplative life made up of continual observations and reflections. Does one become a visionary or, rather, is it not that one has been blind until then?'

"She died in 1969, at the age of 101, a few months after renewing her passport. She was a big influence on the Beat writers, especially Allen Ginsberg, who converted to Buddhism after reading some of her teachings."
Posted by Ivo Fravashi at 1:42 PM