On the way back from Vancouver last week, having spent a weekend under the spell of poet David Whyte, enjoyed a fabulous three-hour French Dinner (at the tapas parlour Bin 941) with my French Boyfriend (a fabulously gorgeous Canadian woman), and frozen my fingers and toes from walking miles and miles through a city blanketed in fresh snow, I found myself in a car with two brave new friends--who had consented to let me share the three-hour ride home with them after knowing me for all of two minutes, one of those minutes having been spent crying (we were in the presence of a poet, for heaven's sake!)--taking a shortcut through customs via the duty-free shop. (A sentence worthy of Henry James!) Not wanting to miss out on the fun, I picked up a $20 liter of vodka with one thought in mind: vanilla extract. 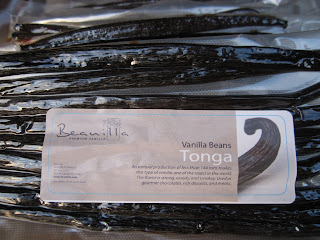 The first time I made vanilla extract, I used the only vanilla beans I could find locally: the Madagascar beans at Whole Foods. Having since read that using a variety of beans makes a richer extract, this time I splurged and ordered eight different kinds of beans from Beanilla, and this afternoon they arrived: vanilla beans from Mexico, India, Tonga, Indonesia, and Tahiti, as well as the standard bourbon beans (made from the Madagascar vanilla orchid).

Once I'd torn open the package and sniffed all of the varieties, the next step was deciding how to mix and match them. Taking cues from Beanilla's descriptions, but mostly just following my nose, I concocted the following three blends:


Rich and Spicy: Indian, Mexican, and Bourbon
Strong and Woody: Tongan, Indonesian, Bourbon
VanillaReview.com has a great extract tutorial, as well as a spice gallery. I follow their advice and use eight beans (one ounce) per cup of alcohol.
After a little snipping and scraping, I now have three bottles of vanilla extract. The last part is my favorite--shaking and sniffing the bottles each day as the contents become darker and richer. 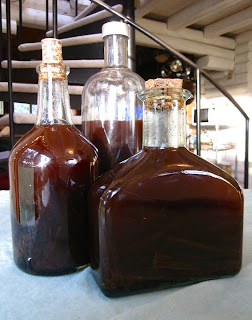 Want to join me for the next vanilla extract fest? Let me know.
Posted by Ivo Fravashi at 4:57 PM