Pair #1: The Spanish cats that were found in a closet as kittens the morning after their feral mother broke into the house, birthed them, and then stole away again! 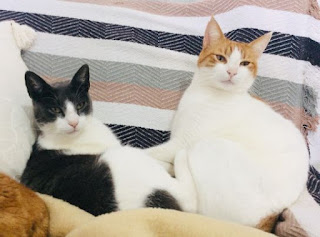 Meet O2 and Orange.
The latter named for her juicy eartips, the former still being a mystery to this writer.
These two are the most calm, collected, and at ease. They're also the only males.
O2 was the first to approach and befriend me and has since gone on to make himself quite at home—to the point of jumping up on the tiny bistro table and going at my breakfast when my back is turned. 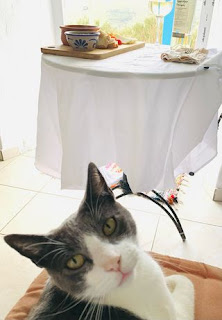 Here he is posing handsomely on the kitchen sill: 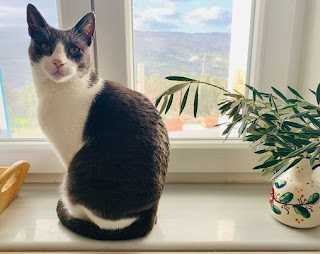 Orange, while taking longer to warm up (just as OJ is thicker than air), has become one of my two best friends. He's always a contender for night cuddles (and often wins!). Look at him go: 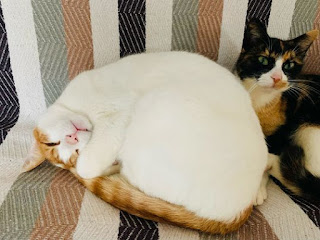 Orange surprised me by accompanying me the entire way on my first half-mile hike around the village: 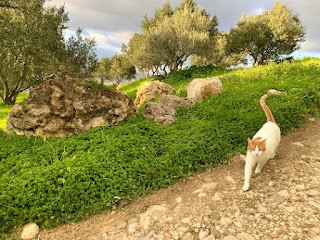 Pair #2: The Spanish cats that a neighboring farmer left on my hosts' doorstep because he had too many and hoped my hosts would adopt them (they did)!
I have yet to see these two together, so they shall be introduced singly:
First up, Saskia, my other new best friend: 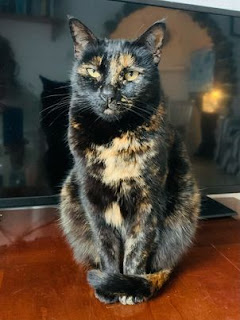 Saskia has the magical ability to walk through walls (or sneak unseen through doors) and is always waiting on my bed for me at night (sometimes even before dark). She ALWAYS wins the cuddle contest.
Here she is coming at me for lovin': 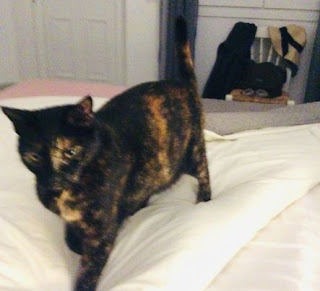 Saskia also has my heart because she's the hermit of the bunch. While the others can often be found lounging together, she's always off a little way, on her own. Yet she's always to be found near me, keeping watch.
Her counterpart, Jaffa: 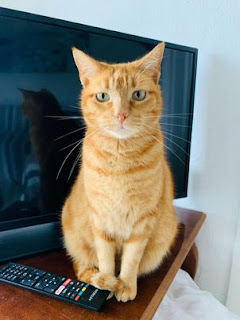 Jaffa is one of the two more aloof cats, though she can be curious as well: 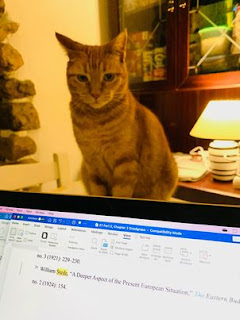 Jaffa is like O2 and Orange in both size and demeanor, and I often find her in their stately company.
Pair #3: The Greek pair born to Mother Cat, who lives in the village, and are in the process of adopting themselves here: 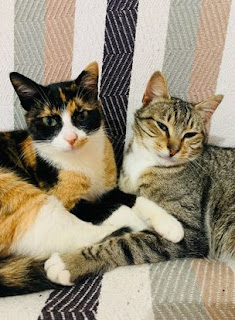 Meet Smarty (on the right) and Pants (on the left)!
They're the young wild ones that alternately intrigue and annoy the older cats.
Smarty is quick and agile and curious and friendly and always on the move. She was one of my first favorites, for she's the readiest purrer, but has since earned more appropriate names such as Trouble, Terror, Mischief, and Monster.
The following photos belie her true nature: 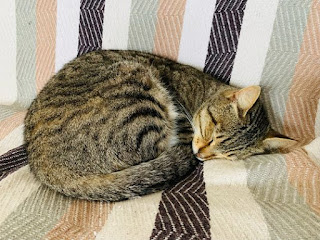 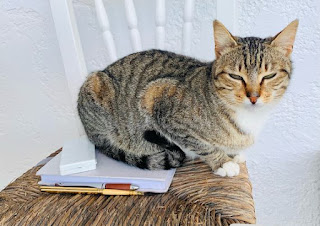 She is NEVER still. And she is NEVER not getting into mischief or creating a ruckus!
She's always the second to run to compete for bedtime cuddles, but she NEVER wins, because if I let her in the bedroom I would NOT GET ANY SLEEP. Still, I can't help but love her. And the mischief cuts both ways: this morning I caught Orange sitting inside the catflap waiting for Smarty to come by so he could tease her!
Pants is the other aloofer:

She's squeaky sweet when she's around, but she's rarely to be seen. When she is, she's purry and curious like her sister, and will wriggle herself around my legs in ecstatic figure 8s.
And there you have it. Welcome to Furridise.
Bonus! On Valentine's Day I scored a visit from the head campo cat of the village, Captain Peacock: 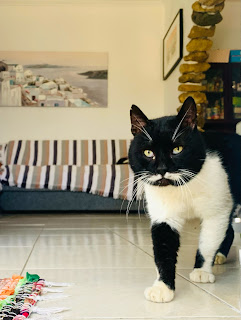 I've seen him in the village, and he's been by here a few times. But on Valentine's Day when the automatic feeders dropped kibble at noon, he walked in the door a few minutes later. He's got a limps, and has surely seen a lot in his time, and I expected him to be surly and gruff, but once he'd finished his lunch, he let me approach him, and after some sweet nothings he was rubbing against my legs and being quite the sweetheart. We had a good long lovefest.